Energy is my buzz-word.

It’s the word I use to describe how I raised those four children along with many other children–on snow days, half-days, and random days off. I filled my car and we drove to the beach, headed to a mountain to ski, rode the train to the city, invited kids to spend a vacation with us, and was “the house.”

And all along the way, I put my mental and physical energy towards writing Kidlit.

Over the last year, I’ve given a lot of thought to the word, concept and reality–where do we put it, how are we using it, is it going to our pursuits and passions, or are we squandering it on unimportant things? We must focus on health, family, and work, but where do we fit in, carve out time, and make a priority our pursuits and passions? Until they become a reality?

A group of moms was catching up, and I said how proud I am of my children. One of my daughters recently moved into her own pre-war, one-bedroom apartment in Manhattan and I am so impressed by her ambition, hard work and determination.

Other Mom: “We should not be telling our kids that they’re rock stars!”

Other Mom: “We have to teach our kids how to be resilient! Things will not always work out for them. There will be times they didn’t get that job or were passed up for a promotion because it went to the boss’s relative! Or they’ll have to live at home while they’re saving money! Or they’ll have health issues. Lots of things in life won’t go their way! We have to teach them how to deal with them!”

Me: thinking—This mom has gone through a horrible tragedy in her immediate family so, although I was taken aback, I listened and said only…

After the gathering, I felt angry and indignant about Other Mom’s words. But they stuck with me.

The more I think about Other Mom, the more I realize she was right.

I know many things won’t go the way my kids had hoped for. As in the times they already haven’t, when they’re faced with disappointments, hard situations, heartbreak, health issues, and death, we’ll discuss how to deal with them, how to process feelings, where to get help, and the ways in which we can support each other emotionally and practically.

But, hon, I want to tell Other Mom that when things do go they way we hoped, dreamed, wished for and worked hard for, in that moment, it is okay to feel like a rock star!

On our excursion to Montserrat, my family hiked half a day and rode horses the other half. We descended the mountain and arrived at Three Rivers Ranch where we met Juan, a Spanish cowboy. His primary focus is his cattle which explains the variety of cows lazing in the sun adjacent to the stables. We learned that he leads trail rides as a way to exercise the horses. We enjoyed getting to know our horses’ personalities and learning best riding practices.

The beautiful countryside that is part of Montserrat National Park reminded me of Tuscany– rolling hills, vineyards, and gorgeous landscapes in every direction. Hon, I felt grateful that the day worked out so well, and that Hubby and I had an opportunity to share a full, active day with three of our four kids. We all love adventure, exploring, and being outdoors.

Writing this post reminds me of other trail rides, one of which was local and a great activity with tweens and teens. (info on that coming soon…)

Living on a hill has its advantages and disadvantages. Disadvantages? Balls roll away, mud and ice makes it especially slippery, the garden’s on a slope, and climbing back up the hill in snow is a workout. Advantage? Being “the sledding house!”

I created this video after a blizzard in 2015, and it always make me smile.

Click link to to watch the one-minute video:  Snow Day/Blizzard 2015

* Quote by Mitch Rothschild, Chief Executive of Vitals, a website that connects patients and doctors, from a 1/25/15 article in The New York Times.

**music on video, Paul Hardcastle-The Jazzmasters “See You in July”

Hon, you know I love snow, especially when it blankets the ground, decorates the trees, and beckons us outside. Crisp, fresh, snow-in-the-sky air makes me so happy. There’s a certain scent before it snows and another when it’s crunchy under our boots. At home, we sled. On a mountain, we ski. This year, the first big snow is a gift to our pandemic-weary spirits–a call to go outside and play. Somehow, a letter from the superintendent of  Jefferson County Schools in West Virginia found its way to my in-box. 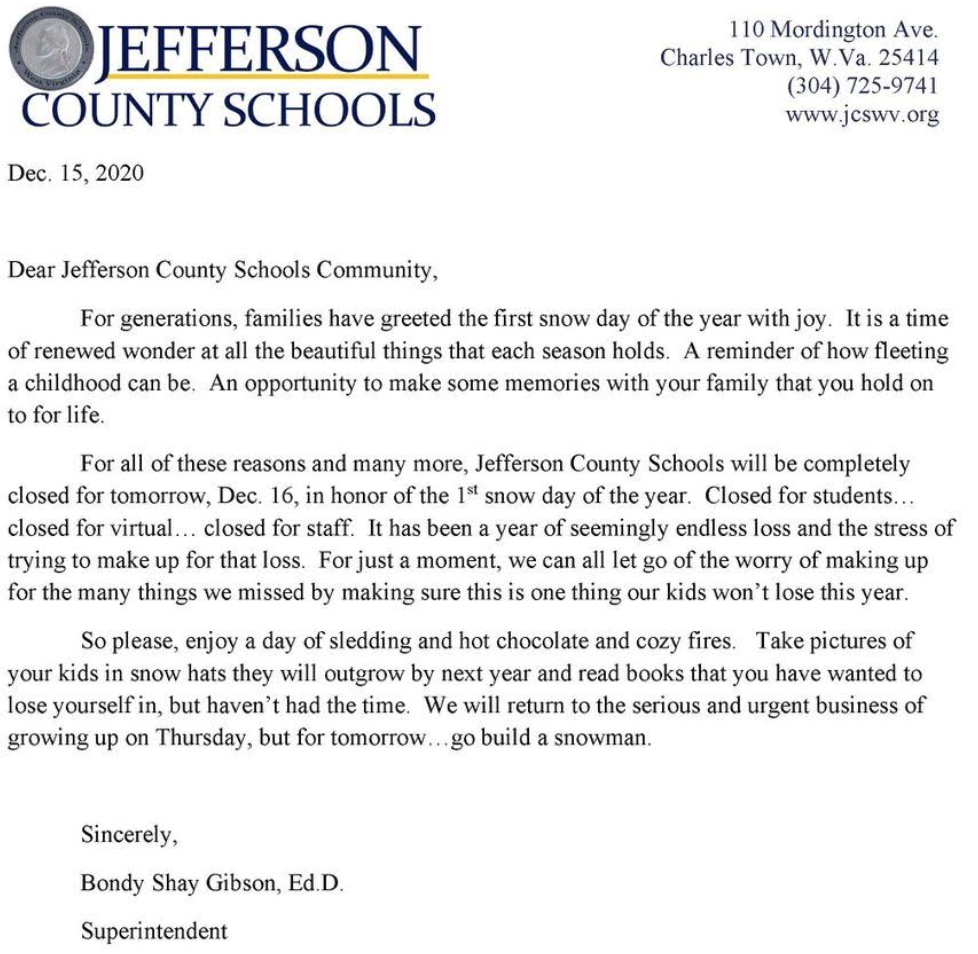 Happy birthday to the three people who entered our lives in four minutes! You captured our hearts, changed our lives, and, yes, strained our patience!

Love you to the moon and back. Love you always!

I read “All You Shining Stars” by Christian Wiman in the December 23, 2019 issue of The New Yorker, and the poem was illuminated by my four shining stars.

All You Shining Stars

Three kinds of hair in the brush one love

has left on the kitchen counter.

Four kinds of cries when it occurs as one

to blow off school and go to the mountains.

And later, over the river, when the upturned duck

Always our elsewheres are also here,

in wildernesses too immense to enter,

the cold clefts and the drastic drops.

Three kinds of sleep in the hum home

down the dark valley back to New Haven.

Four kinds of dreams behind the headlights,

the world springing into being ten feet at a time.

Five kinds of time when one love wakes up

and wonders where we are, and one wonder

Kudos to Saks Fifth Avenue for printing these “No Apologies” ads with  Lauren Hutton in Fendi  and Achok Majak in Proenza Schouler. I especially love the quote, “Over-apologizing takes the worth away from your words.” Want to read more about why girls apologize too much and what it means as they grow up? Check out this article from the Child Mind Institute by Rae Jacobson, “Why Girls Apologize Too Much, How to help them stop saying ‘sorry’ and express confidence.”

Hon, I love the message at the end of the article.

Tools for the future

Helping your daughter drop unnecessary apologies and begin using clear, direct language will give her a powerful tool for success in the future.

No matter who she’s speaking to—friends, teachers, co-workers, or even someday the employees of her own company—knowing how to communicate with confidence sends the message that she’s self-assured, proud of her skills, and comfortable expressing her ideas.

And she’s not sorry about it one bit. 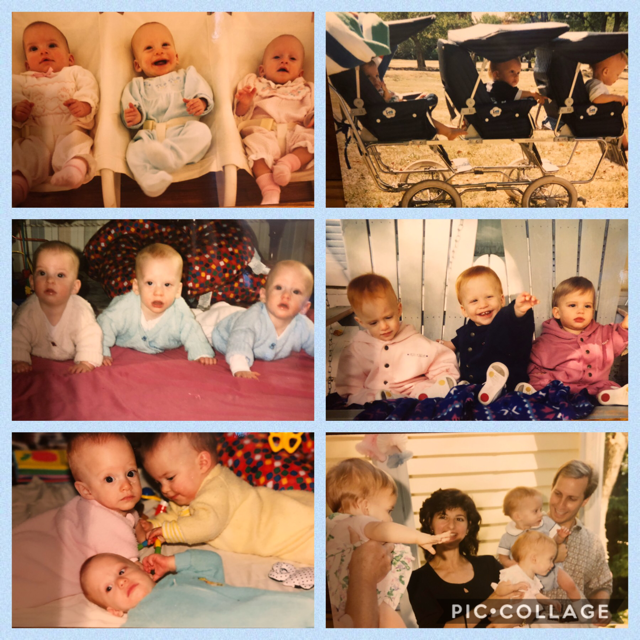 Born at a little over 34 weeks, Baby A (Hannah) weighed only 2lbs 90z and stayed in the NICU for 6 1/2 weeks. Baby B (Teddy) weighed 4 lbs 12oz and had the shortest stay at 10 days. Baby C (Morgan) weighed in at 4 lbs 4 oz and came home on day 12. They were healthy and active and hungry and loud! They’ve kept us on our toes, in tears, and in stitches. They are wonderful, ambitious, smart, thoughtful, empathetic, inspiring and caring people, and I couldn’t be prouder of the young adults they’ve become.

Love you to the moon and back!