Watching the Ball Drop in person wasn’t actually on my list. The thought of being squished in a giant crowd is not my cup of tea. Every year as I watch the Ball Drop on t.v, I wonder why anyone would want to wait for hours on end to be in Times Square whether it’s clear, raining or snowing. To confirm that this was not something I ever wanted to do, I found myself in Times Square a bunch of year ago at the end of December. Cousins and our daughters got together to see a matinee and, though I’m not claustrophobic, I couldn’t get out of the packed-with-people streets fast enough. Hubby and I agreed that the only way we’d go to Manhattan on New Year’s Eve was if we had reservations at a restaurant near the festivities. This year, an opportunity came up.

Hubby found a promotion through United Airlines Mileage Plus and Visa Lifestyle Events–heavy hors d’oeuvres, open bar, dancing, and more at Charlie Palmer Steak. We stayed overnight at the beautifully appointed Conrad hotel. United Airlines threw in an Uber credit. We booked it!

On December 31, 2022, we drove into the city and passed thousands of people waiting in line. Security in the area was intense, so we had to show our hotel confirmation and restaurant reservations to be allowed through metal barriers.

We finally joined the New Year’s Eve party at Charlie Palmer’s where the restaurant was decked out in a 1920’s themes, flappers danced along with the guests, a woman performed acrobatics on an aerial ring, blackjack tables were bustling (people played for fun, not real winnings), a line formed to take photos at the photo booth, friendly people were ready to welcome in a new year, and there were even swag bags.

About 11:40 pm, the entire restaurant–patrons and the event and kitchen and staff–emptied into the closed-off street. There was the ball! We counted down from 10 to 1. Fireworks erupted immediately after. It was very exciting!

Hon, wishing you unexpected opportunities and happy surprises in 2023!

I love it when my nieces or nephew visit! My sister calls it “Camp Naomi” when any of her daughters stay over. Last winter, my brother’s daughter spent a few days in New Jersey, and we had a great time exploring the American Museum of Natural History, hand-building at a Visual Arts Center of New Jersey pottery class, and going on a trail ride at Seaton Hackney Stables in Morristown. Though I live in the ‘burbs and my town is a commuter-train-ride away from Manhattan, you don’t have to drive far to find horses. In fact, Watchung Stable is located in a neighboring county in the midst of the wooded Watchung Reservation.

Located in the Watchung Reservation, Union County’s Watchung Stable has a long and rich heritage. Owned and operated by the County since 1933, its goal is to provide the opportunity to learn how to ride, enhance equestrian skills or just enjoy the natural beauty of the 26 miles of bridle paths that weave through the Reservation, a 2,000-acre forest preserve.

My niece and I enjoyed the peaceful trail ride through Morris County’s Loantaka Brook Reservation. The stables have a low-key, friendly feel, and the staff and guide couldn’t have been nicer.

Hon, need an excellent tween or teen activity? This is it!

On our excursion to Montserrat, my family hiked half a day and rode horses the other half. We descended the mountain and arrived at Three Rivers Ranch where we met Juan, a Spanish cowboy. His primary focus is his cattle which explains the variety of cows lazing in the sun adjacent to the stables. We learned that he leads trail rides as a way to exercise the horses. We enjoyed getting to know our horses’ personalities and learning best riding practices.

The beautiful countryside that is part of Montserrat National Park reminded me of Tuscany– rolling hills, vineyards, and gorgeous landscapes in every direction. Hon, I felt grateful that the day worked out so well, and that Hubby and I had an opportunity to share a full, active day with three of our four kids. We all love adventure, exploring, and being outdoors.

Writing this post reminds me of other trail rides, one of which was local and a great activity with tweens and teens. (info on that coming soon…)

Hon, Bmore Energy might be a lifestyle Blog, but sometimes I feel compelled to break format. The news of the kidnapping of two Amish sisters reminded me of a childhood incident, so I’m combining memory with photographs. Both took me back in time.

When I was in elementary school, and walking home from a friend’s house, a creepy man driving a sketchy car veered to the wrong side of the street and cruised downhill alongside me. I can’t remember if I was 10 or 11 years-old, but I’ll never forget what that man looked like. I could pick him out of a lineup. I felt exposed by his laughing eyes and curling lips.  He sneered, inviting me to join him. I ran, afraid to look back, terrified that he was chasing me. I bolted behind houses until I reached my back door. I banged and screamed until my mother heard me. I was safe. I was fine.

Not really the first loss of innocence for me, but definitely the scariest up until then.

So, two “smart, strong, resilient,” Pennsylvania Dutch speaking Amish sisters are back home. Safe. But, their ordeal isn’t really over. G-d speed their inner and outer healing, and the vanquishing of demons cruising streets with evil eyes and sneering mouths.

Hopefully, open sky, fertile fields and green land will bring peace of mind.  Can you smell the scent of overturned earth in these photos? 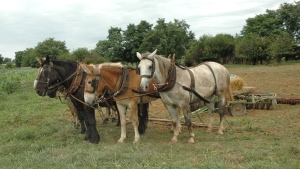 The New Jersey Festival of Ballooning is really something to see! Hundreds of hot air balloons fill the evening, summer sky.  The sinking, orange sun chases the baby blue away until indigo dyes the horizon.

The first hot air balloon ascension I ever saw was in New Mexico.  Hubby and I were hiking in Santa Fe when we heard about a Balloon Fiesta in Albuquerque.  We’d need to drive an hour or so to get there.  The balloons were to ascend at 6 am.  Our plan was to leave before the crack of dawn.

Right before hitting the road, we stopped at Dunkin’ Donuts.  Caffeine was essential at 4:30 am!  Who did I see but three men sitting at the counter wearing cowboy hats.  Not so unusual for New Mexico.  They were also wearing chaps.  Hmm, seemed like real leather.  And cowboy boots with spurs?  I hadn’t seen anyone wear spurs since my brother was a little kid.

Hon, do you know me at all?  I was itching to introduce myself and ask what the heck those men were doing at Dunkin’ Donuts in chaps and spurs at 4:30 am!  I was practically jumping out of my seat and I hadn’t even had half a cup of coffee yet!

You want to know what Hubby said to me?  He said, “You’re crazy!  Don’t bother those men!”  But I kept craning my neck to get a better look at those spurs!

It could be the writer in me, the kid in me, or who-knows-what, but I sauntered over to those three men, hanging over their steaming hot cups.

“Hi,” I said.  “I’m from New Jersey and I’ve never seen anyone in chaps and spurs.  Do you mind telling me where you’re going?”

Those nice men lifted their tired eyes from their coffee and told me how they’d been camping in the desert for several days, how they’d ridden up from Albuquerque, and how their horses were in the parking lot.  Did I want to see their horses just as soon as they’d finished their coffee?  I’d definitely never seen horses in a Dunkin’ Donuts parking lot before. “Yes, I’d like to see them, thank you very much!” and “If I send you a copy, can I take a picture?”

Guess who decided to join our friendly conversation?  Hubby.  We compared the landscape of the Southwest to the Northeast, described what Manhattan looks likes, and talked about lots of other stuff.

I don’t know what thrilled me more.  Meeting those Albuquerque Cowboys or watching hundreds of hot air balloons inflate and rise to the sky.

I met the first gorgeous horse at a Women’s Wellness Weekend held at Camp Speers-Eljibar in Pennsylvania.  The working farm horses in the Amish country fascinate me and the photo of the horse stall is one of my favorites. 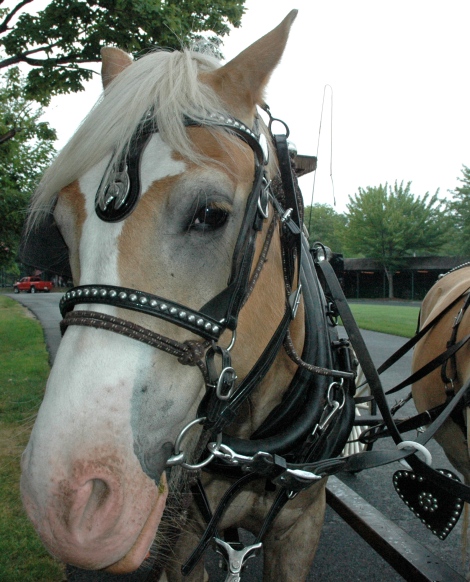 I spotted the horses and carriage at The Sagamore in Bolton Landing, New York and had to grab my camera. I’ve posted the photo of the Central Park hansom cab before (see Weekly Photo Challenge–Circles) but, hey (hay?) the photo goes with the “Carriage Horses” post.  (And I still think it’s romantic!)