The temperature was dropping, the water in the bowl had turned into a block of ice, and Midnight-the-Barn-Cat was looking skinnier than usual despite being fed twice a day. So, just like in my post “Cat and Mouse and Chipmunk,” I played cat and mouse–I became the cat and the cat became the mouse. Caught!

Outside, Midnight wants to be seen and acknowledged, but not picked up and pet. He’s like a tiny jaguar:  prowling, pouncing, hiding and hunting. He’s a very good hunter! Inside, Midnight turns into a mush, lifting his chin for scratches, cuddling contentedly on my lap, and squeaking when he’s had enough. Purr and squeak!

Living in an historic house, you get used to mice in the winter and insects year-round. Good thing I’m not afraid of little animals and won’t kill a spider. If the lifespan of a field mouse is a few years, then the mouse in our house should get a world record because it’s been wintering here for about eight years. When Lucy spots the mouse, she does nothing! Her nonchalance says, “Oh, it’s you again. Please, help yourself to my food,” which is why I thought bringing Midnight inside would accomplish two things:  he’d warm up and the mouse would high-tail it out of here. Wrong!

I started composing a poem in my head about the dog, cat, mouse situation. I got as far as “Dog peeks, cat squeaks, and mouse sneaks.” “Can’t resist” and “coexist” were floating around along with “warm house” and “cheeky mouse,” but then…

…there was the mouse being watched over by Midnight! Caught!

Upon inspection, I couldn’t tell if the mouse was immobile because it was in shock or because it had internal injuries. There were no bite marks or scratches. My guess? Midnight thought it was a toy. Then again, he is a good hunter. I picked up the mouse, warmed it, pet it, talked to it–eyes so shiny eyes and paws so tiny–and set it free outside. Poor thing!

I thought the mouse matter was put to rest, but then…

…A DIFFERENT mouse was rooting around in Lucy’s food bowl!

“Midnight? Where are you!” 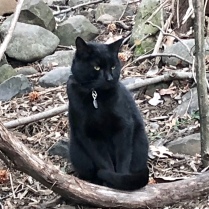 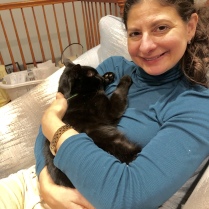 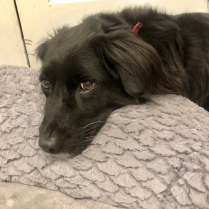 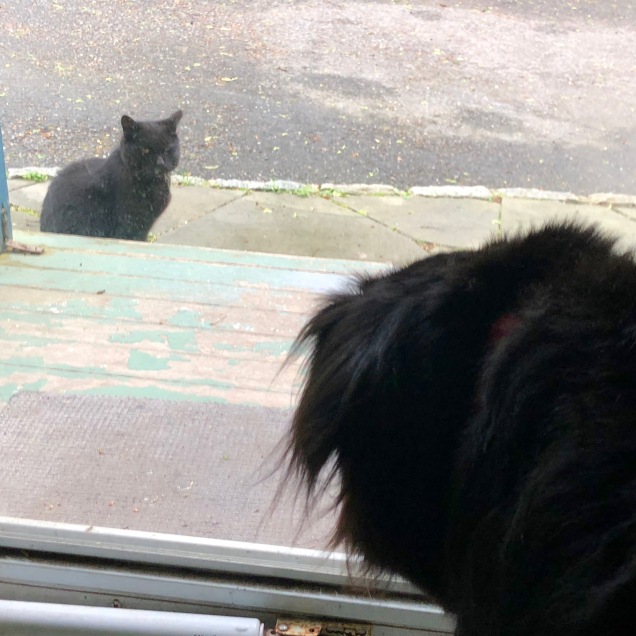 Lucy in the house, staring at Midnight. 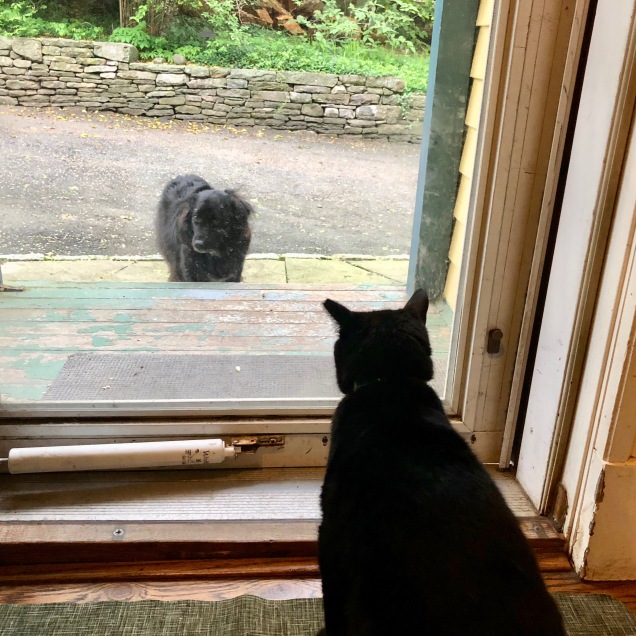 Midnight in the house, staring at Lucy.

When I’m the cat and the cat’s the mouse!

The only time I can get Midnight in the house is when I play cat and mouse with him! One of the times (there have been several) he toyed with a fledgling, I left a door open, he wandered inside and blam! I shut the door, trapping him inside. This way, when I returned the baby bird to the brush under its nest, it had a fighting chance. Hon, don’t cry, “Poor Midnight” since the cat has a dog-free zone filled with a comfy bed, scratching post, a couch, and lots of cuddles and kisses. Now, if only Midnight would get the message…

The staring contest between Lucy in Midnight is funny! I love the pics above, which show them concentrating, but with roles reversed. Lucy has accepted Midnight, chasing all other cats off the property. Isn’t that nice of her? Now, if only Midnight would get the message…

This has not been a good summer for small animals!

It seems like every few days, we come across a deceased bird or small animal! What the heck is going on?! I don’t think it’s all Midnight’s doing. I wrote this tribute to one of those sad creatures.

Chipmunk would no longer chat,

Or stand on base or be at bat.

Sad to say, he was laid out flat,

Thin and gone and, oh no, splat!

I wiped a tear and tipped my hat

Did I do that?

I blame the cat!